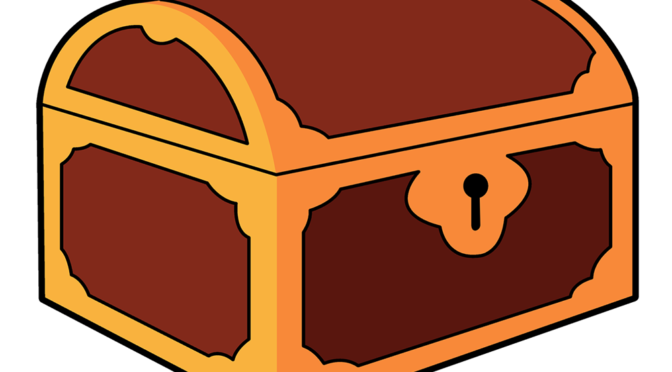 Prepare: You will need a “treasure chest” of some kind.  It can be an actual chest, or as simple as a little box.  It doesn’t need to have anything in it.

As the children gather, set your treasure chest down carefully in the middle of the group, and ask them what they think is in it.

Those are some good ideas! I think that I know what kinds of things you would keep in your treasure chest now.

In the Gospel we hear today, Jesus tells a story about a rich man who has so much stuff that he builds big buildings just to put stuff in.  He is very proud of what he has accomplished and of all his stuff, but he dies at the end of the story! Who gets all the stuff then? I think that is pretty interesting, but not as interesting as the question that started Jesus telling a story (because, you know that when you ask Jesus a question he is going to tell you a story for the answer, right?).

I guess it’s not really a question, but a request.  A man asks Jesus to tell his brother to split the family fortune with him.  Basically he wants half of his brother’s stuff. I think that Jesus is trying to tell this man that he is worried about the wrong things, or that he isn’t paying attention to what is really important. The man seems to be willing to make his brother man just so he can have more money, or animals – more stuff. Now, I wasn’t there, so I don’t know if the man liked his brother, or didn’t like his brother, but it seems to me that Jesus is telling him to stop focusing on stuff, because things can get used up, be stolen or lost, and don’t last forever. Gathering things up in a box is just about as good as having an empty box (You can open the empty box here if you want.) What we should treasure is people! We should care for each other and use our wealth to help each other, not store it up and hide it away.

You are God’s treasure

Loving God, you treasure us and care for us. Thank you! Help us to treasure the people around us more than we treasure our stuff. Amen

For a worship station, invite your congregation to think about the people that they treasure.  It doesn’t have to be someone in the room, they can even be friends and loved ones who have died.  Give them a minute to call those people to mind and then offer a “popcorn” prayer where people can name the people they treasure aloud or silently.

If naming people in prayer our loud is not part of you tradition you may want to have a few “plants” in the congregation to get the prayer started.