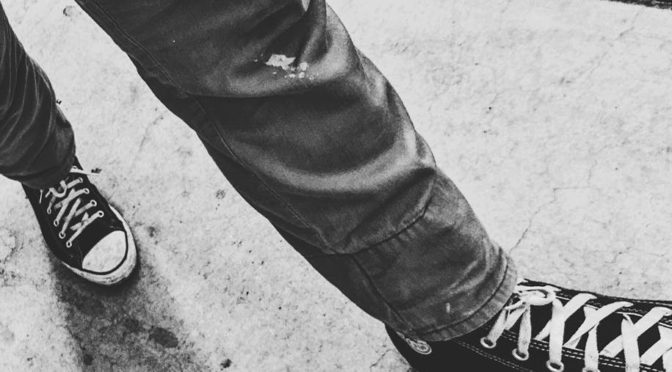 Gather the children in the back of your worship space. Ask them what they know about what was celebrated on Easter and what they know about the morning that the women found the tomb empty. As you are talking, begin to walk to wherever your font is in your space. Be sure that the children are following you. Keep talking until you get to the font. At the font, say, “We come together every Sunday to tell each other about Jesus in our lives. When we baptize people (children, babies and adults), we tell them how much God loves them and is with them forever. We also talk about how we are going to keep learning about God’s love through the Bible, The Ten Commandments, The Apostles’ Creed, The Lord’s Prayer, worship, and Holy Communion.” Then ask them what they know about Jesus from the Bible and begin walking toward the table. When you get to the table, say, “We know a lot about Jesus from the Bible, but in bread and wine, Jesus is known to us in real and concrete way! Give them all bread to eat (if this is a concern as it might look like communion for children who do not yet receive just hold up the bread). Jesus is truly with us just like this bread is truly with us!”

In our Bible story today, some disciples were walking and talking about Jesus’ death and resurrection. A man joined them and began to tell them about what the Bible said about Jesus’ and God’s love. But they didn’t know it was Jesus until they were sitting at dinner with him and he blessed bread and gave it to them to eat! They had been talking to Jesus that whole day! Even though they didn’t know it and they were sad about Jesus dying, Jesus was with them, even as they walked to a different town! Jesus is with us no matter where we walk, drive, ride our bikes or run. Jesus promises to be with us. We can talk to each other about Jesus no matter where we are too!

Everywhere our feet go, Jesus is there! Have different colors of construction paper, pencils, markers and scissors available. Invite people to trace their feet, cut out the tracings, write or draw how they know Jesus is with them in their daily lives, or how they experience the presence of Jesus in their daily lives. Hang them on a wall, or a bulletin board for a week and then invite them to take them home as a reminder.

Dear Jesus, you walk with us no matter where we go. Open our eyes to see you in our midst. Open our ears to hear your words of promise and love. Open our hearts to share the story of the good news of your death and resurrection that is for all people in all times and in all places. Give us your Holy Spirit to renew us for the journey. Amen. Prepare: You really only need someplace to run in from – or some other way to make a BIG entrance.  If you can swing it, be a little late, but have the other worship leaders play up that you are missing the Children’s sermon.

Come running into the worship space panting like you are our of breath, and wide-eyed with excitement!  Call out the children, “Kids!  Come here, quick!  I just saw a dinosaur!”

No really!  A great big dinosaur . . . you don’t believe me, do you?  Well, I guess your right, I just wanted to get you attention.  There isn’t really a dinosaur.

But, do you know how you feel right now?  You were thinking, “No way, there was no dinosaur.  He’s/she’s just making that up to make me think there is one, or to make me look silly when I go check.”

Well, I think that’s the feeling that one of the people in the Gospel lesson had.  That person is Thomas.  Have you ever heard someone called a doubting Thomas?  Sometimes people use that name for people who don’t seem to trust what other people are saying.  Doubting Thomases want proof, something they can see and touch – they don’t want to trust other people’s story

You know what I think?  I think that Thomas, the guy in the story, is treated pretty badly.  Did you hear what Thomas didn’t believe?  Ok – here’s the story:  It’s just a few days after Thomas and all the disciples saw Jesus die on the cross. Just a few days after they all saw Jesus buried in the tomb. All the disciples are gathered together, except for Thomas.  He was out getting snacks or something.  Jesus shows up, all the other disciples see Jesus, but Thomas isn’t there!  So when he gets back and they all say they saw Jesus, Thomas wants some proof.  It’s kind of like they said they saw a dinosaur.  You guys didn’t believe that when I said it.  You wouldn’t believe it until you saw it for yourself! Thomas didn’t believe be cause he didn’t get to see while his friends did.

You know what?  I think that most of us are much more like Thomas than the other disciples.  We want to see and touch before we believe.  Jesus has some words for us, too!  We don’t get to see Jesus the way the disciples did, but we still believe, and Jesus blesses us for that! Even though most of the time we might feel a little more like Thomas, and a little less like blessed believers!

Risen Christ, you show up for us in the most unexpected places.  Sometimes we have to look twice to believe what we hear and see and touch.  Help us to believe even when we don’t see, and be with us when we have a hard time trusting only what we can hear. Amen.

Make some congregational art!  Get some bright paper (preferably something thin) cut into smallish pieces, and some markers.  Have people write or draw something that they believe on the paper.  If you worship space allows, have them tape the paper to a window so that light shines through.  Encourage them to tape the paper in the shape of a cross.  If that doesn’t work in your worship space, collect the paper and make the cross later on a prominent window in you church. 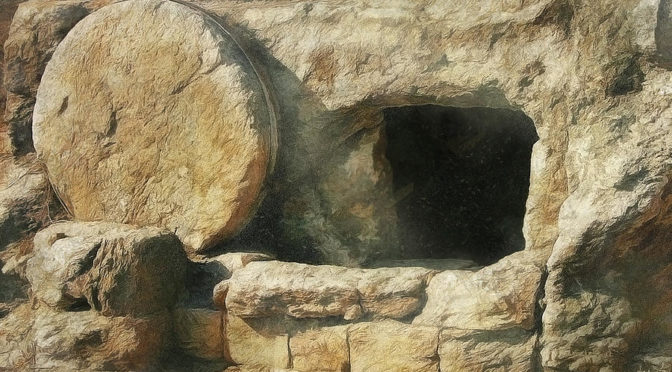 Invite the children to gather around the cross or if you have a prop of the empty tomb in your worship space. Ask them if they know what special day today is. Say, “yes! It’s the day that we celebrate that God raised Jesus from the dead and Jesus was alive! We say today, ‘Jesus is Risen! He is risen indeed, alleluia!’
*You will need a basket of smooth pond rocks (available at a craft store) with a cross drawn on them with permanent marker.

Today we tell the story of the women going to Jesus’ tomb very early on Sunday morning and when they go there, there was an angel and an earthquake (ask the children to shake) and then the big huge giant heavy stone that was in front of the tomb like a door, was moved by the angel all by himself! What do you think the women saw in the tomb? NOTHING! No Jesus! God had done a very wonderful, powerful and unexpected thing! He brought Jesus back to life so that we would all know that God can do and does do powerful and great things and God will always use that power to give us life, love and hope. God’s power is stronger than everything else in the world, including death! Jesus being alive, or what we call resurrection, is a sign of this power and God will use this power for us to be resurrected too! God’s greatest power is God’s love for us always, no matter what. God makes sure that nothing is between God and you and me and everyone! God will move anything, there is nothing that is too heavy for God, to be with you. That is love!

To help us remember this, here is a stone with a cross on it. The stone helps you to remember that God is powerful, loves you and moves everything to be with you. The cross on the stone reminds you that with God, you have life forever!

For a worship station, have someone create a large stone on a piece of cardboard or butcher paper (you can hang that on a wall) Invite your congregation to write or draw where they have experienced God’s power in expected or unexpected ways in their lives. You can add this this in the season of Easter. Have a basket of the same rocks you gave the children available for the adults at this station as well.