Preparation: print your favorite Bible verse, or a congregational memory verse on pieces of paper to hand out to the children.

In the Bible we can read about the many ways God has
shared love with us. Today we heard that God sends prophets or talks
through others to us and that Jesus is teaching in the synagogue.
Words from the Bible can help us to listen for God and hear God in our
every day lives as well. I have for each of you a verse written down
here on sheets of paper. Take the verse and read it or have your
parents read it to you many times this week. You can also write it
down in your own writing or a draw a picture of what it means to you.

Or if you have a favorite verse or ask your parents about a favorite
verse, write that down too or teach it to a friend. (if you use the
worship station you can tie this in at this time, see below)

You are given the word of God in love +

Have a large sheet of paper and Bibles on a table.
Ask people to write down a verse they know, remember, or that is
important to them. They can write the whole verse or just the
scripture reference. For the children, give them verses to write down
or have them ask their parents to share a verse. If you use memory
verses in your setting you can have the list of memory verses out for
reference as well. During this next week take the verses and put them
into wordle.net and create a wordle of the verses people wrote down.
Post this on your website, facebook, etc and/or have it printed out
for the next few Sundays. 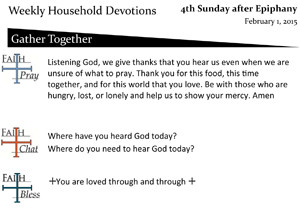 Here is the devotion page for The Fourth Sunday After Epiphany, February 1, 2015.

Gather your household and share these questions together: What troubles you today? What brings you joy today? Pray together for all of your troubles and joys. God is with us in every part of our day!

For adults and young children alike, it’s easy to think that all we have to do is pray and Jesus will heal us of everything that ails us: the flu, a cold, cancer, heart disease, mental illness, loneliness, etc. Reality is that we live in a world where bodies still get sick and die but that doesn’t mean that God doesn’t hear our prayers and isn’t with us! The good news is that God’s promise is for life for us forever with God and God is with us in the pain and sorrow of the reality of disease and broken bodies in this life. As a community we also support, love and pray for each other as well as point out where God is at work when we can’t recognize it ourselves. Be sure with young children to emphasize God’s presence with them.

For children: What do you pray or talk to God about? Do you ever pray by yourself? God wants us to talk to God always! There is not anything that God isn’t ready to hear! How can you show God’s love to others? Do you think when we help someone, give a hug, offer nice words or draw a picture for them that we can make someone feel better if they are sad, sick or hurt?

For youth/adults: Where/when do you most often pray? Do you have a standard prayer, do you simply speak to God or do you sit in silence with God? People in our world are searching for something. We are all searching for happiness, joy, love, security, belonging, self-worth and the list goes on and on. In the Mark 1 story the disciples tell Jesus when he goes to a deserted place to pray that people are searching for him. The good news is that Jesus comes to us and searches for us. Jesus is always there. How can we reveal Jesus’ presence of love, hope, forgiveness and mercy in the world that is so desperately searching for those things? How do we use shopping, food, alcohol and other ways to fill our searching with what only God can offer us?

Pray for one another’s troubles and joys today. Offer prayers for all people to know that Jesus is with them and loves them. Pray to be filled with the love and compassion of Jesus for those who do not have enough to eat, adequate shelter, are lonely or are in need of healing in any way today.

In our Growing In Faith Together-Sunday School for All on February 15th we will be putting together Blessing Bags to keep in your car to hand out to those in need that you may come across in your day. We are collecting the following items: gallon size zip lock bags, juice pouches, band-aids, antiseptic wipes, non-perishable snacks, feminine hygiene products, tissues. We will also be making note cards with an encouraging message to go into the bags. As a household collect those items and make a few notes for the bags.

+Jesus is with you always+ 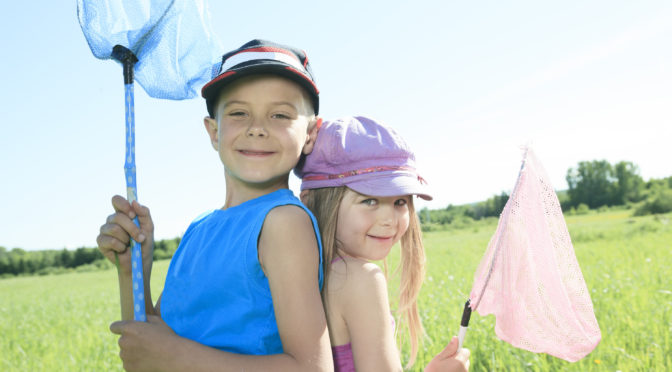 Preparation: Have some netting from fruit or other sources cut into hearts, one for each child at least. Have a large fishing or butterfly net handy.

Today go through the worship space and personally invite all of the children (or anyone else you want!) to follow you. Bring a fishing (or even butterfly net) with you and pretend to “catch” the children in your net. Be a little quick about it and if the children are in the “middle of doing something” tell them to immediately drop what they are doing and come with you. By the time you arrive at the spot where you normally hold children’s time, some of the children will have been following you for a while.

Ask: “Why did you come with me when I asked you to? (If some child refused and it’s possible ask them why not?)” Accept all answers but hopefully someone will say something around that they knew you, they kind of knew that it was children’s time and wanted to go, etc. “It’s easy to follow someone when you might know where they are going or what they are doing isn’t it? Have you ever had your mom or dad tell you that you were going somewhere that you had never been before? What was that like? Was it a little scary or strange?” Accept all answers. But you know that your mom and dad love you and so you knew it would be ok.

In our story about Jesus today, Jesus is walking around, sort of like I was walking around the worship space this morning, and was calling people to come and follow him. The people he called in this story were fishermen. They caught fish for a living. But Jesus wanted them to come and catch people for God. Did Simon, Andrew, James or John have any training in telling people about God? No. We don’t even really know if they knew Jesus that well, or had even heard of him! They didn’t really know where Jesus was going but they sensed that Jesus was safe and loved all people. They were caught by Jesus’ love for us all! So they followed knowing that somehow it would be ok.

We, too, are caught in Jesus’ love and Jesus calls us all to share God’s love wherever we are and wherever we go. No matter what else you are doing, even when you’re older and have a job like your mom or dad, your first job in your life to tell others about Jesus! Jesus’ love is like this net that catches us all and connects us all to each other and God. We can catch people with Jesus in the net God’s love! (Have hearts cut out of netting to hand to each child and even adults!)

God of love, we are grateful to follow you. We are thankful that we are caught up in your love each and every day. May we be nets of you love in the world. In Jesus name, amen.

Have a large net on a cross for a prayer station. Have 4 x2 (or so) fish or hearts cut out for people to write prayers of thanksgiving for all of the ways that we are caught in Jesus’ love!

+You are caught in Jesus’ love+ 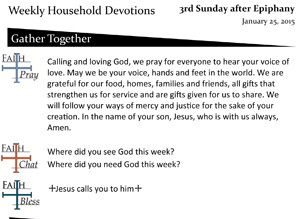 Here is the devotion page for The Second Sunday After Epiphany, January 18, 2015. 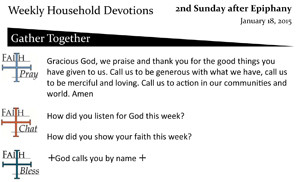 Here is the devotion page for The Second Sunday After Epiphany, January 18, 2015.

Prepare:  You will need someone to help with this one. The idea is to have someone calling to you from an unseen place. For example, if you have access to a wireless microphone that can be used just outside your worship space, or maybe from behind a screen.

Invite the children to gather and ask them if anyone has ever called to them – no, not on the phone – but called to them in a loud voice? Like a friend on the playground, or parent calling for them to come inside, etc. As the children are offering ideas, have you partner call to you.  They should keep calling every 10 seconds or so until you find them (so they should be in an agreed upon place to save a little time!), but there needs to be time in between calls for you to talk to the children.

Wait! Did you hear that? I think someone is calling to me right now! Let’s listen. Oh well, what were you saying about being called?

Well, in the stories God calls to people. God calls to Samuel as he is sleeping in the temple, and Jesus calls to Philip and Nathanael to follow him. In both stories the calls are unexpected, and in both stories the people being called have to trust and believe in the call, even though they either cannot see the person calling, or don’t know where the call will take them . . . Listen, there’s that call again!  Alright, let’s go find them!

(now go searching for the person, take as longs as you need to find them, make a fun game out if it.)

When you find the person calling, have them ask for help with something simple, like carrying in the communion elements, or with lighting some candles, or collecting offering, etc.

I’m really glad I heard that call, and I’m glad that I could help. Samuel, Philip and Nathanael also answered when they were called and they became some of God’s most important helpers.

Loving God, praise and thank you for all the work you do in the world. Teach us to hear your call, and to work every day to be your hands and feet in the world. Amen.

God calls you by name.

Either hand the blank banner on the wall or lay it out on a table. Have various colors available (crayons, pencils, etc). Invite people to write where they hear God’s call in their lives on the banner.